Pierre Labbé is always ready to get involved in causes close to his heart and has taken part in the recording of the soundtrack for the film by NOMAD ’s Jason Rodi  on the events of 22nd April. To this end, he has conducted a session of semi-structured improvisation with members of the Magnitude6 and Movimento groups. The images were taken during the impressive  2012 “Jour de la Terre” (Earth Day) demonstration in which 250,000 Quebeckers took part.

Hugo Lefort, of Li.photographie presents his version of Ad libs and fibs with Michel Flaubert, which will be premiered at the Festival international de musiques actuelles de Victoriaville (Victoriaville International Festival of Contemporary Music) on 18th May 2014 in the Pavillon Arthabaska. A risk-taking, energetic and rhythmic video. 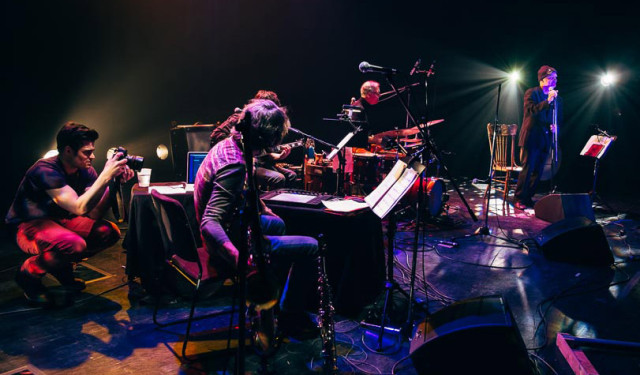 See the creative process of Ad libs and fibs in photos.

A month or so after the preview of Ad libs and fibs, Patrick La Roque unveils the show’s creative process in fascinating photos. Taking a sometimes sober, sometimes lyrical but always relevant viewpoint, he admits us to the intimacy of the artists and shows us a creative and all-encompassing process.

Note that the musicians and the narrator go head-to-head again at the show’s première in the Festival de musique actuelle de Victoriaville on 18th May at 8 pm in the Pavillon Arthabaska. END_OF_DOCUMENT_TOKEN_TO_BE_REPLACED